Whatever shortcomings the photo-a-day discipline had, the resulting posts were at least reliable. I now have to rein in that well known thief of time, procrastination.

Truth to tell, my photography since my last post has been lacklustre, and I am posting now as my first attempt to regain control. Mary and I have a road trip planned in the near future and I hope that will reignite the fires of creativity.  Anyway, let’s begin. Sunday the 13th, I went to the Futuna chapel in Karori to hear a concert buy a group called WOSOSI (World Song Singers). The Architectural award-winning chapel was a familiar and loved venue for me, since I had participated in a number of spiritual retreats there. The retreat house has long gone, and the chapel itself is de-consecrated,  but it is a registered historic building and the concert was part of a fund-raising endeavour to help in its preservation.

One of the co-leaders of WOSOSI is a former colleague from my days at the New Zealand Dairy Board, and though I saw her posting about it on Facebook, I went with no real expectations. They were an absolute delight. Their repertoire is global and in this concert we had songs from Norway, various parts of Africa, France, Australia and New Zealand. They are an a capella group, so the voices had to be perfect, and they were.

Part of the group’s charm is that they absolutely love what they do and take great joy in singing, whether it’s a psalm, the softest of lullabies or full-throated drinking songs.

More recently, I joined members of our camera club on a trip to Staglands Wildlife reserve on the Akatarawa road. Like our choristers above, my fellow club members love what they do which is why it is a pleasure to join them, despite my natural inclination to solitude. We began with a pleasant lunch in the cafe and then followed the ranger to feed the birds in the kea enclosure. The kea is an alpine parrot, and it is rare to be this close to one outside of the mountains.

Today I went out to Plimmerton where I was happy to get close to a very large flock of white-fronted terns on the rocks near the fire station. I find the tern a very attractive bird, clean agile and graceful.

I hope for better things to come.

It’s fun having a teenage granddaughter to visit.

The last time I took Grace to Staglands was early in 2005. She had few memories of that earlier visit, but seemed to enjoy this trip just as she did last time. Her pleasure in encountering the various animals helped me to see things anew too. The large Clydesdale horse, the fallow deer, the goats, the rabbits, the highland cattle and the guinea pigs were all of interest.

The aviaries contained various birds, not all of which I recognised. This one seemed to be engaged in nest-building.

From there, we went into Wellington where Grace enjoyed exploring the “Op-shop scene”. It soon became clear that this was something for which she didn’t need me, so we arranged to meet later at the bucket fountain and parted company. I wandered shooting random items of interest, including these guys dangling over the edge of a building cleaning windows.

During my free time, I sat in the Cuba Mall area and watch a trio of young people engaged in some sort of performance art. It was a combination of dance, song and poetry. They progressed down the mall in exaggerated slow and graceful motion, singing very melodically as they went. Every so often they would stop and the young men would recite some lines involving Wellington and its environmental renewal. I am not really sure what they were achieving. No collections were taken, and their message was not entirely clear, but they were very accomplished and a pleasure to watch. If anyone recognizes them, please put them in touch with me, and I can send them some images.

And that’s another day done.

You wouldn’t like it if I were to sing.

But I do regard myself as a wandering teller of stories, with pictures thrown in. On some days, I go where the whim takes me, with no plan or intention in mind. I have said before, that serendipity is not a recipe for great images. Nevertheless, absent any grand plan, I shall take what I can. And so I found myself above Silverstream on a back road in the Blue Mountains area.  The people who live up here enjoy a wonderful mix of bush, birdsong, views and isolation.

The road I was on was barely wider than the car, and I had my window down, so I spotted the various mosses, lichens, liverworts and fungi on the forest floor. At first glance I thought I was looking at a colourful stone, but a careful prod suggested it was a fungus of some sort. Friends have tentatively identified it as purple pouch fungus (Cortinarius porphyroideus). It mixed well with the moss surrounding it.

The moss seemed worth a closer look. Though I had my macro lens with me, I didn’t have the tripod. The light was low so a slow shutter speed was required. The macro lens has an extremely shallow depth of field so getting a sharp hand-held shot was a real lottery. I have no idea which particular moss this is, but it’s amazing how the dense green from a metre away gets to be translucent from closer in.

In the afternoon, I went to the city where I found myself in the civic square. It always impresses me to see lots of young people working in the city library, assuming they are not tweeting or on Facebook.

Not everyone likes the discipline of the library, and if it is at least reasonably fine there are always people perched in unlikely places around the square with their laptops in action.  It’s not my idea of a comfortable work environment.

That’s all for now.

We had a special visit this weekend, from our Queenstown granddaughter, Billie.

For at least part of Saturday, our younger daughter Helen came and took Billie and her cousin Maggie out to do “girly” things, like getting fingernails painted nd shopping. That left grandson Cooper at a loose end, so Mary and I took him out to Staglands wildlife reserve on the Akatarawa Road. Since it is located seventeen km West of Upper Hutt in the midst of steep hills and dense bush, there is considerable truly wild wildlife as opposed to the captive animals and birds. We were waiting for a ride around arts of the reserve on a trailer hauled by a tractor when there was a commotion on the trees.Two large native wood-pigeons were racing around, and I suspect it was some sort of courtship process. Each time she landed he would be right behind and she would take off. They are spectacularly clumsy birds at landing and take-off so there was a lot of nose and broken twigs.

On the way around the loop track, we paused to see an old farm-house, seemingly long-deserted, The oddity was the TV aerial, in an area where I am fairly sure there was no reception even back in the days of VHF transmission.

In one of the aviaries, there were some spectacular rainbow lorikeets engaged in mutual preening. It is all too easy to anthropomorphize and presume some kind of affection where none may exist.

My next image is taken a moment before a tragedy. As you can see Cooper has a bag of animal pellets in his hand. The Fallow deer stag has seen many such bags and swiftly snatched it in its teeth with a sideways flick of its head. The swinging antlers caught Cooper a hefty whack on the head and tears followed. However, all was soon settled and food and drink in the cafe helped to put the unfortunate episode behind us.

While all this was happening, our neighbours were about to get married. The bride was running a little late, so when she, her attendant and the photographer joined her in the car, that gorgeous 1955 Bentley S1 took off and a very fast clip to make up for lost time.

Some places, few adults go to without taking a child.

Even if they have to borrow the child, some people won’t go to a zoo or a theme park unless they can say “of course I only went because I knew (the child) would enjoy it” Thus it seems to be with  Staglands Wildlife Reserve, a farm park on the wild and tortuous Akatarawa Road between Upper Hutt and Waikanae.  I can’t remember when last I went there. This time, our grandchildren, Maggie and Cooper were having a sleepover with the grandparents, so we wondered where to take them during an unpredicted spell of bright fine weather. You guessed … Staglands.

As I said, the road is rough, and the 17 kilometres from Upper Hutt to the park can be challenging for kids who might feel a little queasy on such a winding road. We got there without incident and had our picnic lunch before doing the farm itself. And there I struck a little treasure. Outside the café, there is a deck and just off it, a feeding table for wild birds. I wandered over with long lens, and this time ensured there was a card in the camera.

My first customer was this lovely bellbird or Korimako (Anthornis melanura).

The blue dusting around its beak is apparently pollen from its visits to fuchsia flowers. Notice the tip of that nectar-seeking tongue at the end of the beak.

And then came a cluster of a dozen or so waxeyes (Zosterops lateralis) of which I present just two. The waxeye (also known as whiteeye or silvereye)  is such a tiny bundle of feathers, I find them irresistible. Click to enlarge these pretty little birds.

We dropped the remains of our picnic in the car and went the rounds of the park. Among the many interesting and amusing sights was a kid (of the goat variety) which was under the illusion that it was a sheep dog.

It was terrorizing a herd of deer and was running them ragged up and down the hill at the back of the farm. I have no idea why the much larger animals were so distressed by a fellow herbivore, though its colouring was not unlike that of a border collie.

The large horned ram was unperturbed by the antics of his junior relative, and ignored the frisky little fellow. 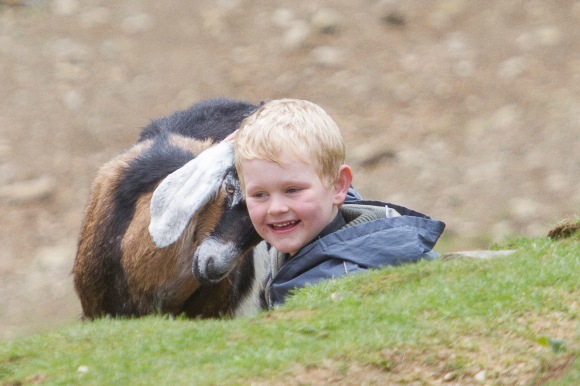 Meanwhile, Cooper became firm friends with one of the other “kids” and perhaps they each recognized kindred spirits.

For her part, Maggie loved the reindeer, and was so generous with the food pellets that she had none left for the lovely old trio of donkeys at the end of the trail.

This broke her heart, and the donkeys were none too pleased either.

We were all a bit tired by the end of the day, and after briefly considering healthier options, opted for fast food. As I was on my way down the hill to collect it, a spectacular Southerly front was advancing up the harbour to extinguish the last of a fine day.

With due attention to the rear view mirror, I screeched to a halt , hazard lights flashing, and snatched an image on which to end the day.