With no coherent design or purpose, I was popping up here there and everywhere. First, it was at home where Mary was making a batch of shortbread for a function at her place of work. Double torture! I smelled the aroma of baking but knew it was not for me.  Ah well, at least I got a picture of them.

As I went out of the door to look for an image, a tui flew into the flax bush near the door and ignoring presence, began probing the flax flowers for their nectar. It seems that the craving for nectar overcomes their normal caution.

When Mary came home from her work with the local school, she brought with her a very large moth which I believe to be the female puriri moth  (Aenetus virescens). Like most moths it has a very short life-span, and the tattered state of its wings suggested it was near the end of its time.

In the evening, it was the final camera club night of the year with prizes awarded and a shared supper, all very congenial. Since we are nearing the solstice, the light lingers, so after the club rooms were locked and dark, I went down to the harbour at Seaview where I watched the little fishing boat, J.Vee returning up the glittering pathway of the Hutt River estuary to its mooring.

A little further along Port Road, there was a nice view towards the city with the dark silhouette of Matiu/Somes Island outlined against the lights of Wellington.

That will be enough for now.

Endless dreary grey as far as the ten-day forecast will stretch.

At Petone beach, there is a certain sense of adventure as you look down the harbour mouth and see the heavy weather coming towards you. Nobody was walking on the beach which, as usual after prolonged rain, was littered with driftwood from somewhere up the river.

Around to the Eastern side of the harbour, the coastal tanker Torea added a touch of red relief to the greyness. I imagine that unloading was happening with minimum human intervention. Certainly there was no one visible on her deck.

In the marina at Seaview, the forest of masts brought strange ideas to mind as to the kind of crop that might be grown in such a forest.

In Eastbourne, I lifted my gaze to the hills and enjoyed the contrast between the kowhai tree nearby and the misty ridges behind.

Given the steady breeze, it was improbable that there would be good images.

I tried anyway, beginning at the Seaview Marina where, to my huge surprise the water was almost glassy calm. I should add that today’s images were all made on the Fujifilm XT-1. The more I use it, the more I like it. Colours are crisp and clean, focus is sharp. It has a WiFi capability which means I can connect it to my iPad or phone and see what the lens is seeing, and refocus or adjust the exposure, and then trigger the shot without touching the camera.

At lunchtime, Mary and I did one of our “you bring the food, I’ll provide the location” picnic lunches. I chose Scorching Bay on the Eastern side of the Miramar Peninsula. Children are not yet back at school, so the beach was busy. We set ourselves up on a grassy place on the South side of the beach.

In the evening, Mary had a meeting so I seized the opportunity to cash in on the golden light. At Petone wharf, as the sun neared the horizon, there were people walking, fishing, swimming and walking their dogs. A very nice evening.I was lining up on the sunlit haresfoot grass when I spotted the young man balancing on the handrail of the wharf under the approving eye of his grandparents. It’s a long drop to the wharf and an even bigger one to the beach below.

The wharf as a whole was buzzing with all kinds of activity.

From there is was back home, but one last scene appealed  as I crossed the Normandale Bridge.

What will tomorrow bring?

Can you hear the sound of the year winding down?

Like a jet engine at an airport, the year is coming to a standstill.  For me it has been an interesting year. Technically, I retired in October last year. However, I accepted a contract to teach one more course from March to June, so I don’t feel as if I have had a full year as a retired person.  Then Mary and I did our five state tour of the US (with side trip to Canada).

From a blogging perspective, this is my 365th post (there would have been one more, but for the date lost somewhere in the Pacific Ocean over the date line).  According to the statistics WordPress sent me, the blog has had 33,000 “views” since 1 January.  A thousand images were loaded. I have no idea how many unique visitors there were, but they came from 70 countries.  Thanks for sharing the ride with me, and special thanks to those of you kind enough to interact by way of comments or emails.

Yesterday was a very windy day in Wellington, and Mary and I were almost lifted off our feet walking around Pt Jerningham. There’s nothing of Mary, so that’s no surprise, but I am quite solid so it was disconcerting having to maintain my grip on the footpath. We came back up and over Maida Vale Rd, and down into the headwind on Oriental Bay.  Under the terms of my contract with Mary I don’t carry a camera when walking for exercise, so I can’t provide evidence of the conditions, but they were very vigorous indeed.

Later in the day, I was at Seaview looking across the harbour and noticed the enormous “Voyager of the Seas” berthed by the cruise terminus. She is a big one … at  137,276 Gross Tonnes, one of the largest in the world with 3,100 passengers, 1,100 crew.  I liked the view between Matiu/Somes Island on the left (and the arch I had not previously noticed), and the much smaller Mokopuna Island on the right. You get a sense of the wind form the state of the water. 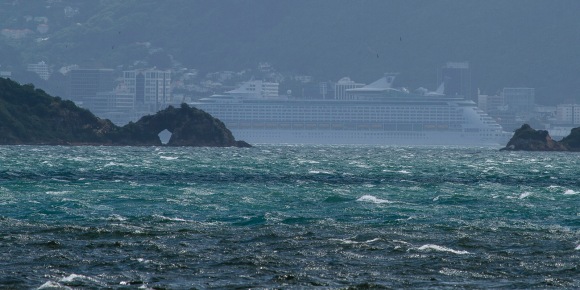 From there I went up the Western hills and from high up on Normandale Rd caught this panorama of the lower valley. The CBD is in the centre, and you can see the Hutt River winding its way to the see on the right. You really do need to enlarge this to see the detail

It sits out there in the harbour, humming quietly to itself, waiting for the visitors.

I surmise that a vast majority of Wellingtonians have never been there. There are no shops, no entertainments, nothing but some hills, some bush, some tracks and some birds. Oh, and some wonderful views.  Mary and I took the East by West ferry from Queens Wharf to Matiu/Somes Island yesterday. The trip itself was a pleasant beginning since the day started out fine and relatively calm.  Rowing crews were out in their racing shells being barked at by the coach in an outboard powered boat. A few yachts were making good progress. As we neared the Southern end of the island, traffic in the harbour suddenly became quite busy.

The tugs Toia and Tiaki were  out there waiting to take the lines from an inbound container vessel. The pilot-boat Tarakena was making rapid if somewhat bouncy progress across the wave tops having delivered the pilot to the “E R Brisbane”, a Liberian registered 2,517 TEU container ship of 30,280 registered tonnes.  Grim thoughts of the ill-fated and now almost dismantled Rena  which wrecked on Astrolabe reef near Tauranga came to mind.

Suddenly the turning point seemed quite congested as the Interisland ferry Arahura came charging up the channel much faster than the larger ship, turning inside her course, presumably in consultation with the pilot.

Both vessels started to swing and I found myself staring straight at the bow wave of the oncoming Arahura. She had, as they say in nautical circles a nice “bone in her teeth”. Fortunately she was more distant than she looks here.

On landing, all visitors to the island receive a mandatory lecture from the DoC Rangers on the island’s biosecurity measures, together with a close inspection of all bags to ensure that no unwanted pests find their way ashore. After a  climb from wharf to the path that circumnavigates the island, we watched the Black-backed gulls (Larus dominicanus)  which are the dominant form of bird life on the island, wheeling and soaring in the drafts above. Hundreds of them were on the nest, since it is the season for it. In fact this is their major nesting place in the region.

At the South end of the island, we paused and I took a series of seventeen photographs which I stitched together with the aid of Photoshop, to create this panorama encompassing about 180 degrees of the view to the South through the heads.

After a visit to the old lichen covered gun-emplacements on the island’s summit, we resumed our circuit, moving to the Eastern side of the island. Here with heavier bush cover, the birdlife was more diverse, and we saw parakeets, and heard the unmistakable grey warbler.

I am not particularly expert at bird identification, but this next little fellow had a beautiful song and I think (and hope) that it is an Australasian pipit (Anthus novaeseelandiae). He hopped along the path in a way that made me suspect we were too close to a nearby nest. 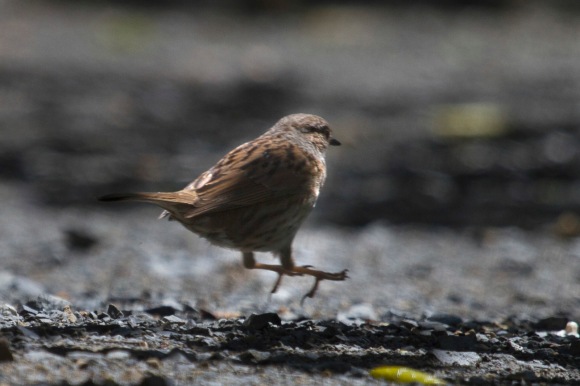 Next we encountered one of New Zealand’s most beloved natives, the fantail (Rhipidura fuliginosa), flitting around and enjoying the feat of sandflies that were stirred up as we passed. At one stage this bird almost flew down the barrel of my lens … just inches away. They are a very mobile bird, and it is hard to catch them in the air, so here it is, a tiny little ball of fluff with a splendid set of tail feathers. Sadly this image didn’t catch the fan fully spread. Never mind.

Down at the wharf once more, we enjoyed our lunch at a nearby picnic table, in a spot sheltered from the rising wind before returning to the city.

If you are in Wellington, and haven’t been to Matiu Somes Island, then take advantage of the easy access afforded by the ferry and enjoy a very special place.