Splendour and majesty don’t begin to cover it.

The mighty coastal redwood (Sequoia sempervirens) is in a class of its own. Note, these are not the huge giant redwoods – Sequoiadendron giganteum – which have a diameter up to  23 feet in diameter, but top out at around 280 feet. There are examples of the giant redwood through which a road has been made.

Of the small remnants of the once plentiful coastal variety, most are in the far North of California, and we simply did not have the time to travel that far.   However just 32 km from our motel in Santa Rosa is the Armstrong Redwoods State Natural Reserve. I have no language adequate for this experience. Within minutes of leaving the car park and the ranger station, the temperature has dropped by about ten degrees, and the dappled green light has removed the stresses of the world. It is a cathedral. There is an absolute stillness to the place (except when there is a noisy group near you on the trail, and we were usually moving more quickly than they were so we left them behind).

But the creatures we came to see, the tallest living things on the planet are awe-inspiring. The very tallest of them, named “Parson Jones” is 310 feet tall and 13.8 feet in diameter. It is estimated to be 1,300 years old. And it just goes straight up, seemingly forever. I have no idea how to capture that as an image, though I tried.

Parson Jones is not the oldest. That honour goes to the Armstrong Tree which is two feet shorter, a foot wider, and a hundred years older. Another notable exhibit in the park is a cross-section salvaged from a vandalised tree. Various growth rings are tagged with the noteworthy events in human history which occurred when that particular ring was laid down. Eric the Red, William the conqueror, the black plague, the great fire of London, the arrival of Columbus.m the civil war, and the San Francisco earthquake are all marked. 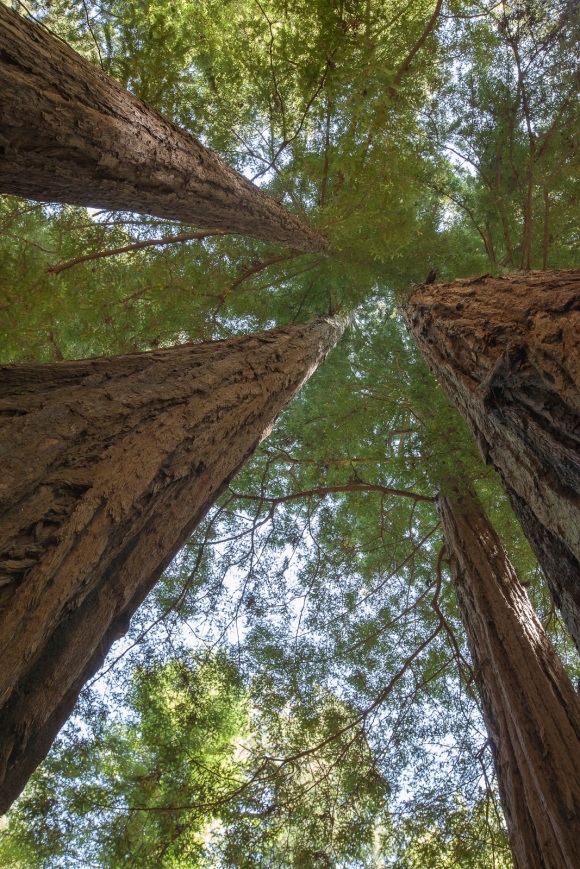 When old trees eventually die, seedlings tend to propagate around the site of their fallen parent and create a “fairy ring”. The name seems trivial, but it was labelled thus on the adjacent sign board. Leaving the path and treading on the sorrel that surrounds the trees is simply wrong, so using my wide-angle lens, I set the timer on my camera, and reached as far into the circle as possible without leaving the path and then let it go.

And then I found the council of elders, which is my last image of the day.

From there, we went down to the coast at Jenner, and turned South along the normal spectacular highway 1. I say normally, because yesterday it was wreathed in fog and being a winding road near sea cliffs caused more stress than pleasure. Even beautiful Bodega Bay (site of the Hitchcock movie “The Birds”) seemed lacklustre yesterday. I attempted some bird shots and saw a variety of unfamiliar (to me) gulls, a flight of brown pelicans, a lot of crows and numerous soaring buzzards.

The frustrating thing was that 10 minutes from the coast the sky was clear and the day warm.

But the forest made up for it all.