As I write this, the Radio NZ Concert Programme is playing the 1812 Overture.

We have just arrived home after our very hasty trip to Napier. Somehow the mood of Tchaikovsky’s beautiful opening movements matches perfectly with my perception of the scenes I was taking yesterday. As I mentioned Mary and I had dashed up to Napier to be with Mary’s mother who had suffered a serious health set-back and we feared the worst for her. Happily she staged a come-back so for now, at least, all is well.  Mary sat with her mother and I went to the beach at marine parade to contemplate the meaning of life and to take pictures.

It’s a fearsome beach comprised of billions of small grey pebbles. It shelves very steeply and the relentless waves produce a tremendous backwash. It has claimed many lives over the years. This is a beach to look at rather than to swim at. However the grand sweep of Hawkes Bay from Cape Kidnappers in the South to the Mahia Peninsula in the North is a magnificent place for contemplation.

Later in the day, I went up the road through Taradale, and from a ridge looked at the moody landscape to the West. I am quite unsure which ranges I am seeing in the distance … poring over a map leads me to believe they are the Glenross range and the Black Birch range.

Sadly I didn’t read the advertisements with enough care. The airshow was the previous day. Missed it. That left us with a great deal of flexibility as to how we used the day. The weather was fine with a slight high overcast, and not excessively hot. Napier’s low tide was scheduled for 09:31 am, so perhaps Cape Kidnappers?

We checked the DoC site and it suggested an 8km walk each way, and to allow 5 hours for the round trip. It warned that it was necessary to leave Clifton around three hours before low tide, and to start the return journey no later than an hour after low tide. We never gave the guided tractor ride a thought, though they are obviously popular.

We enjoy walking, enjoy each other’s company and like the opportunity to share our enjoyment of the scenery together. Besides, I think we see more on foot. From a distance, the coastline from Napier to Cape Kidnappers seems gentle and attractive. One out of two is not bad. It is certainly attractive. Spectacular, even, but very far from gentle, and this becomes apparent even as you set foot on the beach at Clifton.

You can see another pair of walkers in the centre of the image, and a fisherman on one of the many quad bikes we met on the way. The cliffs are sheer, and fragile, and dangerous. The beach is a mixture of sand, pebbles, slips, rocky outcrops, and boulders the size of small buses. Walking requires care, and even the tractor rides pick their way with caution between the often boisterous surf and the many obstacles along the base of the cliffs. 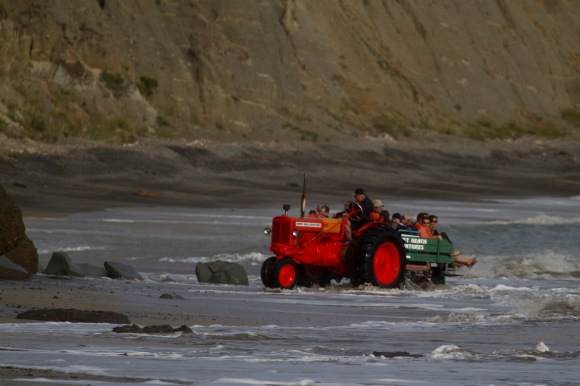 But we were on our way to see the birds, and kept up a steady pace.  Just short of the main colony at the cape we encountered this low flying NZ fur seal basking on a rock. They have such soulful eyes and appear to reproach you for the intrusion into their space.

Other birds were seen, including terns, pigeons, swallows, oystercatchers and white-faced heron. Our target however was the gannets (Morus serrator)

It took us about two hours to reach the information centre at the base of the cape, which was pretty respectable, given the number of photographic pauses on the way. The path to the Plateau Colony was a little bit of a “gut-buster” and is advertised as 25 minutes more.

Approximately 5,000 birds live in this colony. Crowded living conditions take on a whole new meaning as the cacophony of gossiping neighbors squawk and gobble at each other. But the direst consequence of such crowding is the stench. London or Paris may have smelled like this in the fifteenth century.  To misquote a traditional poem about rabbits by an anonymous author, “The gannet has a charming face, its private life is a disgrace”.

Regardless of the squalor at home, all is forgiven the moment they are airborne. Suddenly they become the most graceful streamlined creature on the planet. 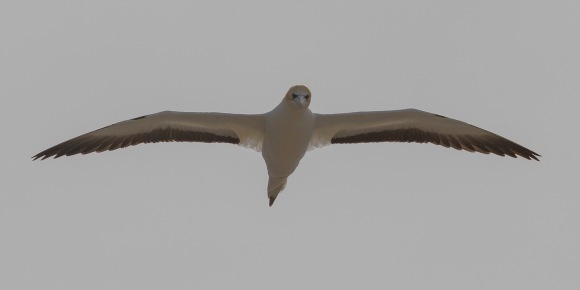 … until landing, that is. Then they become clumsy and this one looks as if it flared out too soon and stalled into its roost  from a considerable height. Good strong legs are a necessity. The other birds judging the quality of landing don’t look impressed. “Oooh! This is going to hurt!” 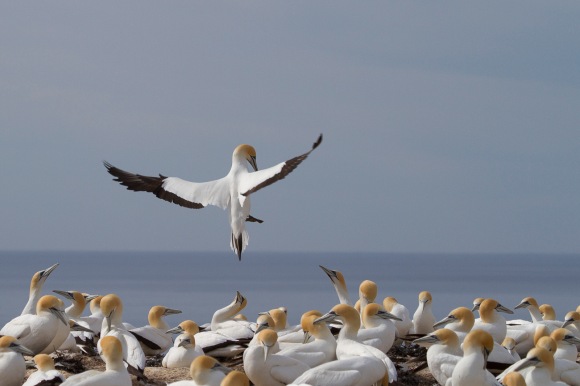 One of the notable features of gannet colonies is the courting ritual which usually begins a lifelong relationship. They all look the same to me, so how anyone can tell whether they are being faithful or not is a puzzle. Their courtship rituals look almost like a fencing bout. 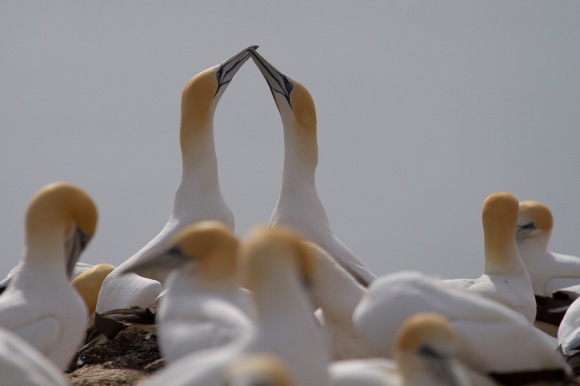 We left it rather late for the return leg of our walk, and for me there were a  few anxious moments when we had to wait for a receding wave before scuttling round a big rock to regain high ground before the next wave.  But we made it without mishap, enjoying a clear view of the snow-capped summit of distant Ruapehu on the way. We also got a good view of that astounding geology.

The weather deteriorated on the way home and just south of Dannevirke we had a shattering downpour which required the wipers on high speed and a much more cautious drive.

We passed through Masterton just as the train was heading for Wellington.

Near Carterton, I paused to try for a “receding planes” landscape as the Tararuas were fading in and out of the cloud, and the train came rushing through. Oddly, despite the twisting and turning over the Rimutaka Hill, we beat the train to Upper Hutt. Odd. It has a straight run through the tunnel.

If you are in Hawkes Bay, see the gannets.